A downloadable game for Windows and macOS

Beneath Floes is a short work of interactive fiction.

Qikiqtaaluk, 1962. The sun falls below the horizon and won't return for months. You wander the broken shoreline, wary of your mother's stories about the qalupalik. Fish woman, stealer of wayward children: she dwells beneath the ice.

Thanks to people's support from a Kickstarter campaign, Beneath Floes is available in English and Inuktitut for free.

Many thanks to Pinnguaq and the Nunavut Film Development Corporation for assistance with oversight, feedback, and distribution. All faults are my own. Additional thanks to the localization's 143 Kickstarter backers, who made this possible with their support.

"[Beneath Floes is] also about storytelling, and what stories mean as they're passed on and retold to different people across years. It's a mite spooky and unpleasant and cruel and warming and I'll stop listing adjectives if you go play it."
- Alice O'Connor, Rock, Paper, Shotgun

"Aside from the chilling sound design, the words themselves are presented rhythmically, emulating the master oral storyteller's attention to tempo and cadence. The major beats in the story make for a gripping experience that's sustained throughout, the call of the qalupalik as bewitching as it is frightening."
- Jess Joho, Killscreen

"I appreciated, too, the passages where material that relies on cultural context is presented just clearly enough for someone not native to the Arctic to understand, but yet not overly explained."
- Emily Short

Unzip the downloaded file, then open the file that ends in ".html" with your choice of web browser. Chrome and Opera run the game best, but Firefox and Safari are supported. The sound files must be in the same folder as the .html file. 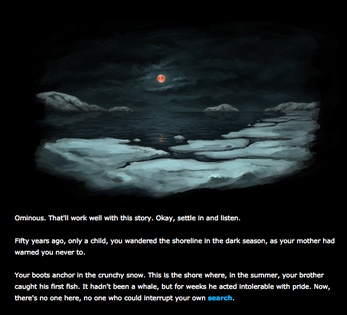 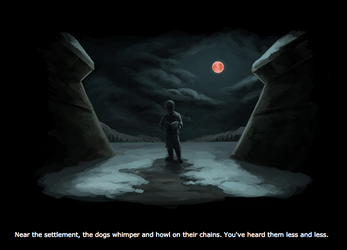 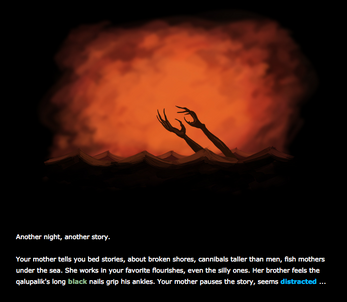